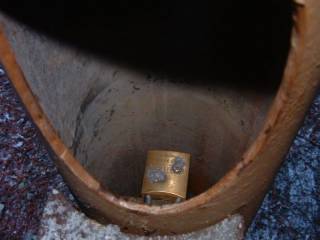 You know, whomever did this is giving a bad rap to people who supposedly like the great outdoors, and especially Scenic Hot Springs. What on earth could possess someone to engage in such silly vandalism? What is it going to prove? We will simply have the lock cut off and replaced . . . only first, we have to notify the Forest Service . . . as in United States Government Forest Service?

Yep, that's right. The person, or persons responsible were on Forest Service lands, that was a Forest Service gate and the padlock is U.S. Government property. Oh, and you shot a firearm off within 100 feet of a Forest Service Road, which is specifically prohibited by federal law. That, alone is a $5,000 fine and/or six months in prison. Seems you are facing several federal felonies and I would suspect that you left plenty of evidence laying around . . . including those slugs in the padlock.