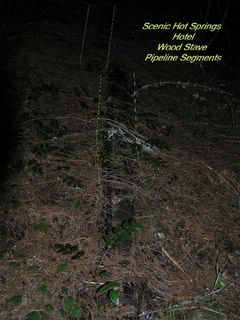 Photo: We begin today's post with something I always enjoy history.

It's been three months since I last posted and that's mainly because I've been busy and there is little that can be reported that is not conjecture or speculation as far as development efforts go. Also, I must respect the owner's confidences until such point that he suggests it is okay to talk about some of the developments vis a' vis negotiations with state and local officials. Mike has recently suggested a little bit more of a public approach on Scenic and I agree with him in this regard. In the next few days I will be posting a detailed proposal of what Mike is trying to accomplish and how state and local officials have responded. Hopefully the posting will generate some ideas and suggestions for approaches to be made to make Scenic a reality. Meanwhile, some of what has been happening up at the springs . . .


Winter brought typical erosion problems to the property. The BPA Access Road faired terribly with deep V-cuts being made across the road for emergency erosion control. As it is now, only the most sturdy, high-clearance 4x4s even have a chance to driving all the way up to the trailhead.

The Forest Service road did better and with a little bit of care (and the help of bridging boards) even my little Honda Civic can make it to at least the first tower in the BPA corridor. However, that is a moot point to those without official access; the gate remains locked at the FS Road beginnings.

The area of the BPA Access Road and Honeymoon Creek suffered a series of significant slides over the course of winter storms and early snowmelt. The culvert remains blocked under tons of mud, rocks and trees; and creek waters are forced to cut deeply across the road surface (having no where else to go). The area on the slope above remains tenuous and susceptible to more slides.

On a positive note, the log water bars we emplaced last fall have done their job and keep the widened trail in really good condition. Past the widened area, there is some significant erosion of the trail. This is an area where King County has delayed giving us emergency permits to control water runoff; and as a result, water has been channelled straight down the trails resulting in some treacherous footing and loose rocks.


The pools have done really well this winter season thanks to the help of several people, but notably to Sushi Bob who goes out of his way to clean and maintain the remaining pool at Scenic. Bob has also removed one hazard that always reminded me of the Sword of Damocles . . . that huge boulder in the vee-course above the springs (and directly in-line with the pool) that was tenuously held in place by inch-thick fiber-ropes. Mike remarked one day that he'd have to get heavy machinery up there to safely removed this multi-ton granite boulder . . . to which Bob responded . . . I'll break it apart . . . to which I responded, you and how many sticks of dynamite. Over the next few weeks I caught Sushi Bob up there with his little, insignificant rock hammers and chisels. Then one day, lo and behold . . . the rock was split in half . . . then in four. All with little rock hammers. So that boulder is no longer a threat and a bonus . . . Bob says it was full of geodes . . . Thunder Eggs.

On a negative note, someone . . . or several someones is/are attempting to build another soaking pool up where the Bear Den Pool used to be. I can understand their desire to do so but this is just taking us all the way back to the way the illegal construction started in the first place. I know at least two of the people who are doing this (though I have no way to contact one of them). We keep tearing it down . . . they keep rebuilding it and making a mess. One of these nights after 2am, I'm going to go up there just to confront the responsible person.

Visitation is up. I see more and more people making the trek up to the springs and many of these are first-time visitors. Most of them are responsible, understanding the need for picking up litter and respecting the pools. Abhorrent behavior is down. Again, a lot of that is because George, Bob and myself have been chasing off the alcoholics, the aggressive and the just plain stupid folk. Let's hope it stays this way and we can get the soaking culture turned around to a positive experience.

In an historical find . . . I went hiking over closer to Surprise and Deception Creeks and found the actual wood-stave pipes that the original Scenic Hot Springs Hotel used to pipe hot spring waters down for it's guests. I'll leave it to others to conjecture what the find means as far as the present Scenic Hot Springs; but suffice it to say . . . I am convinced that there are other hot springs waiting to be "re-discovered" nearby.

Mike's development plans and the problems he is running into are going to be the subject of another post in a few days and I plan of making that post an rather extensive one. So look forward to it.
Posted by Rick at 11:10 PM 1 comments 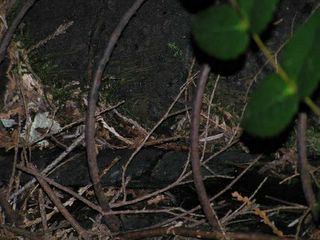 Photo: A close up of the wire coils of the wood pipes 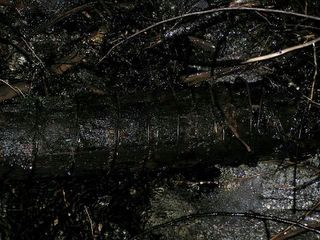 Photo: Wood pipes were used to transport spring waters to the hotel 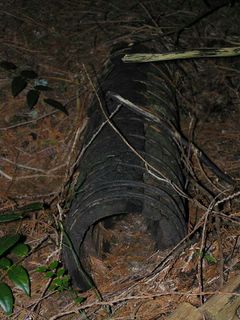 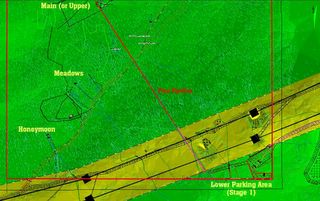 Graphic: A closer view of the lower NW corner where development of a parking area and some pools might take place. 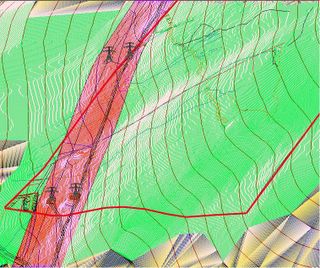 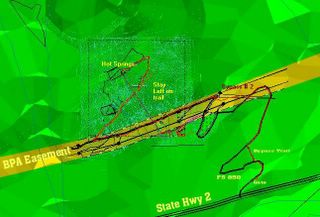