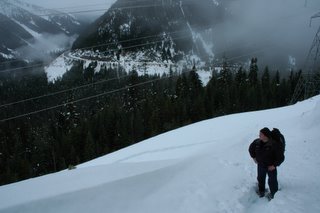 I visited the springs this last Monday the 27th. The day started out partly cloudy with a little drizzle, and ended with increasing rain. The snow is pretty deep in places and required considerable effort to get to the top. I think going up it took us a total of 2 hours and 15 minutes. There were many times that we stepped into "soft" snow and sank to our thigh, which was an eerie feeling. We spent a couple hours at the top, and took a bunch of trash out with us. I was pretty frustrated at seeing some of the trash that was there. I won't go into details on the public forum, but suffice to say whoever did it is lucky I didn't catch them at it. Looking at the parking lot, road shoulder and trail, it appeared that noone had been there for at least 2 days. The human tracks that were on the trail were melted in and crusted over.

As we started to come down the trail around 4:15, it started raining a bit. Amazingly as we were coming down an 1/8th mile from the top of the springs, we passed a couple that was 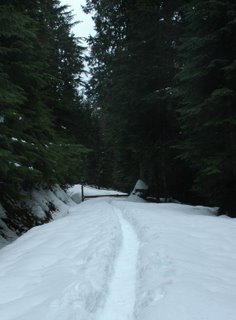 just going up! To say the least they were shocked to see us. Considering they were going up to the top at that time, they were not dressed for the conditions. The girl had on tennis style shoes with jeans/sweats, hat and a light jacket and no pack. They guy had on a bit heavier jacket with a small back pack. She looked at us, saw our snowshoes and said "Are THOSE snowshoes?" I indicated yes they were and asked if she came all the ways to the top dressed like that. She indicated she had, which was shocking considering the conditions. Considering the falling darkness, lack of total winter clothing, no obvious pack for winter conditions and the naivety of their endeavour I was quite frustrated. I didn't see their vehicle on the way out and got no license plate. If that were to happen to any of you given those circumstances what would you do/say? Would it have been appropriate to demand they turn back around? I know that by the time we got back to our vehicle, we were very wet and glad to change out of our clothes.


I took a digital thermometer to measure pool temps. They colder of the 2 was 98.7, and the warmer was 101.6. At the source coming out of the warmer tube it was above 109 and my thermometer maxed out. 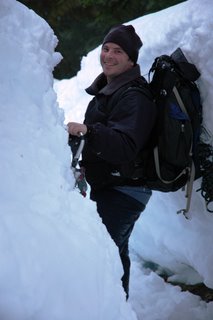 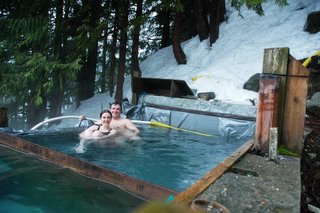 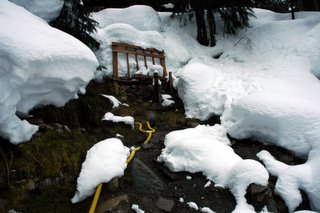