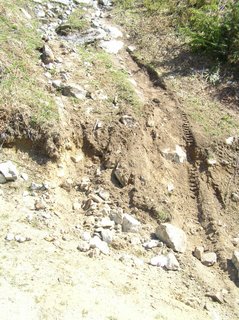 An idiot tried to drive off the BPA road and onto the second foot bypass trail sometime soon after the gate was broken open this week.

I went up to Scenic Hot Springs today and found the gate still wide open. I did not see any of the locks nor the tang the locks were attached to. There was one car parked there and evidence of tire tracks of a narrower width than your truck (and fresh tracks) headed up the road. At the base of the lock post were several large caliber cartridges and pieces of metal that looked like they came from a lock. The assumption is that someone shot the lock off. I hiked on up after closing the gate and securing it with a piece of wood through the tang.

At the beginning of the BPA clearcut there were plenty of deep-tread 'mud/snow' tire tracks around. Certainly not your truck which has different tread. There were no vehicles further inside. That this was someone being stupid was shown by an off-road vehicle trying to drive up the narrow trail of the second bypass (tire tracks go up about 15 feet.). It's difficult to say whether they went any further
on up the BPA road, though there are a lot of tire tracks most of the way up.

Meadows creek is running very strong on both the trail and the BPA road. On the BPA road it is spalling the road surface and creating a second cut. The other creeks seem at the levels expected for spring runoff.

On the trail, there are several areas where the trail edge is sloughing on the downhill side . . . just before the Muddy Creek crossing (old trail and large stump). The log water bars are doing their job. A few leak underneath and I corrected water flows where needed. Rock alley is running pretty strong but should subside when the snow above is finally melted. Above rock alley, the springs near
the switchback are flowing strong. The waterbar below it is handling the flow and creating a new channel downslope.

There are still patches of snow a foot or more deep above the switchback. The flat area is still snow covered on up to the firering above the springs. There is earth slippage and sloughing on the trail right above the Bear Den spring sources. Also, the wooden retaining structure has dissembled and only remains upright (and at a cant) by the guy wires to the trees upslope.

Above the Lobster Spring sources there has been earth slippage by several trees and boulders that really concern me. There is another large granite boulder exposed that is perched precariously like the one Bob broke in half.

The bench area to the east of the pool is clear of snow and you can easily get to the construction stockpiles there. The pool, itself is in terrible shape and in need of scrubbing. Lobster Springs are running three to four times normal volume and cold (55F). These springs have been diverted away from the pool. We need to figure out the proper route to divert these springs when they run cold. Lots of
erosion going on.