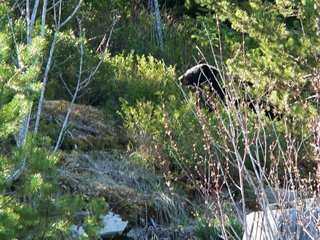 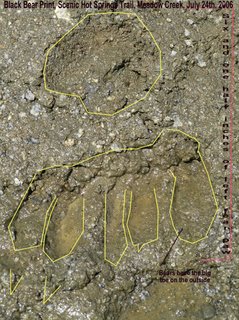 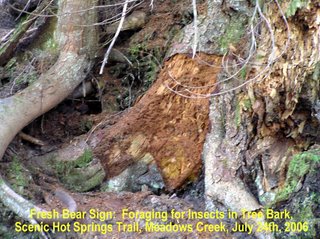 It was reported to me that a couple sneaking up to the springs (with two dogs . . . pit bulls, one off leash) encountered the black bear on the upper BPA road near the second tower. Fortunately the bear wasn't interested in them . . . just looked at them as they backed off. Unfortunately, this bear seems to have claimed the territory and is at home around humans and human scent. We have to remember, though, that this is a female bear with at least one cub and the potential for coming between her and her cub is high. I've had at least six sightings in the last week at all times of the day.

Bears are normally shy but will become extremely aggressive if they perceive a threat to their young. Be aware . . . make noise and make sure the bear knows where you are. Surprises cause bad encounters. If you are faced with a problem:
An observation . . . I went up there. Yeah, I'm crazy but careful. Noticed my warning sign on the gate had been torn down (thanks, you idiots). I followed the bear prints as best I could and they definitely went up the trailhead area. Bears are foragers, especially for the garbage we humans throw over the side of the trail. Think about that the next time you feed the wildlife up at the springs. Are we inviting troublesome bears to take up residence?

Bottom line? Well, you probably don't belong up there on private property anyway, but if you are going to continue to ignore the signs please keep in mind that this area is forest and wilderness . . . this is bear territory. Be aware and Be careful!