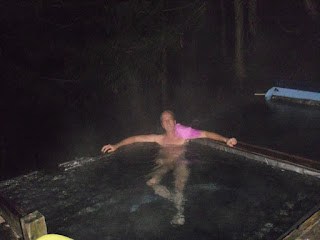 Skies clear for a few hours for a spectacular show
Well folks, you missed one spectacular stellar show of the Orionids Meteor Shower this past Monday night. Though the weather at first didn't seem like it was going to cooperate, the clouds did part and clear at the elevation of the hot springs for a few hours just as the constellation Orion was coming into view directly above the hot springs. The trails of meteors streaked across crystal-clear skies every couple of minutes and I can't think of any better way to watch the show than to lay back in very comfortable water far away from extraneous lights.
Ten people had responded, giving desire to join in. As one of the stewards of Scenic Hot Springs, we don't often give permission to visit the hot springs at night . . . the dangers of hiking in the dark, misbehavior by visitors at night . . . being the primary reasons. A night visit doesn't happen too often. So I was a little disappointed when no one showed up at the gate after having responded positively. The weather, I guess. Fog was thick and the weather cool and on the damp side. Fortunately or unfortunately, I was committed because I'm hosting this event and I'd like to get any visitors up there before nightfall makes the trip iffy.
Eventually, I give up and head into the clearcut to park. The fog (or clouds) are thicker up here. The outside temperature gauge in my car says it is 46F outside. The air was still which helped. By the time I reached the trailhead proper at 3,000ft, I knew I was hiking directly into the heart of a cloud latched onto the upper mountain slopes. It got heavier and moister the higher I hiked. I could feel the dew beading on my skin, but I was feeling comfortable and enjoying every moment of the slow stroll up.
I reached the springs right as the last of the day was slipping below the western ridges. Time to set myself up, pull out those trash bags to protect my gear from dew (and possible rain) . . . and get into that marvelous water. Immersion into 103F silky water has a decidedly sensuous rush to cold-tightened skin. The water was perfect! The only disappointing part was that I could see no more than fifty feet or so above me. The springs were smack-dab in the middle of an obstinate cloud! No star views.
Night darkened and I soaked, alternating between the comfortable Bear Den pool and the much hotter 118F Lobster pool . . . and then out to stand and cool on the small deck with a cup of coffee before slipping back into the springs.
Around 8-8:30pm the clouds slowly oozed downward on the slopes. Some action of thermodynamics as the temperatures lowered? It was getting colder out. Below, on the slopes, I could see the top of the cloud bank, almost touchable . . . any potential head and tail lights from Hwy 2 far beyond seeing. Above, crystal-clear and millions of stars peppering jet-black heavens. I lay back to watch.
The Orionid Meteor Showers are the dust-particle-sized remains of Halley's Comet during it's last pass through the inner solar system. Once a year, during October, the Earth passes through that region of space and those tiny particles get swept into our atmosphere to burn up as meteor trails. The Orionids are so named because they appear to originate from the constellation Orion (those three closely-spaced stars in a line near Sirius . . . the brightest star in the sky . . . that we have all seen, but maybe not recognized).
Orion was due to rise directly overhead around midnight (from the southeast). At midnight the meteor showers would appear to be coming in directly from above. In the few hours before zenith, the showers would be streaking across the sky from the southeast . . . a much more persistent view. As I watched, lo and behold . . . there was one, directly over the crest of the slopes. A minute or two later, another. In the untainted black of the skies far from city lights the trails were stark and long lasting until the final burnout halfway across the skies.
Guys (and gals), you missed a show!
The shoulder of Orion was just coming into view when a new bank of clouds started occluding the stars above. Well, I got the best part, I suppose. I waited, hoping the mists were just tempoary but no dice. They just got thicker . . . and my soles and palms were getting wrinkly from prolonged soaking. Time to head back down.
The headlamp was almost useless, the hike slow and with very careful footing. By the time I reached the clearcut 500ft below, the wind had picked up and misting rain begun. Near the bottom I did get disoriented for a moment, wondering where my car was. I started to turn toward Scenic Creek until I stopped, thought about it and reasoned it out. Wrong side trail. Fifty feet away and totally obscured sat refuge and warmth. Moral of that thought . . . don't ever get so complacent or cocksure that you make a mistake that can get you completely turned around. Weather changes in an instant in the Cascades. That's the reason I carry survival supplies in my backpack . . . I know Scenic as well as most people (perhaps better), but I almost went off in the wrong direction.
Back inside the car as the heater is getting up to strength, the temperature gauge shows how much the weather has cooled. 36F. I'd been peppered on the final stretches by the light sting of snow. The windshield has a patchwork of those wet, melting particles now. Cold enough.
Yeap, you sure missed a great stellar event, folks.
Posted by Rick at 9:49 PM