The Forest Service is going to be interested in this individual 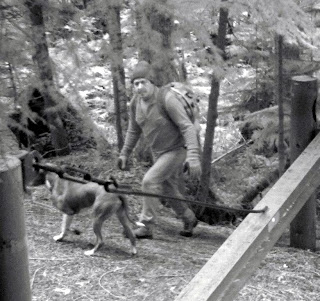 One of the surveillance cameras we've installed at the springs . . . and a test of it's capabilities.
You can view some of the images it took over a period of a couple of days here:  http://www.anthonians.org/forgotten_knot/Scenic%20Trespassers/
Posted by Rick at 6:23 PM 6 comments

The hot springs are the biggest lure to this scenic valley at the foot of Mount Princeton, but they are now the source of a looming fight over whether it will be the site of the state's first geothermal electric plant.

On Wednesday January 6th a friend of mine and myself went to check on the state of the hot springs (my visits are always random). When I arrived at the gate, not intending to open and drive up I once again found the lock had been cut from the gate. Not much of a surprise as this happens more often than I care to admit. I do believe that the gates lock continually is removed by the same group of people. Anyway, continuing up the mountain I found the state of the hot springs to be abhorable! Two empty 12 pack bottles of beer lying on the deck and every single empty bottle flung down hill to break on the rocks. Towels, underwear, socks and a few shirts, pistachio shells, sunflower seeds, Russian dried fish snack packaging and lots of other food garbage was strewn about the soak. I was thoroughly disgusted to see this behavior in the middle of winter. Generally the winter crowd is much more respectful to the property. So I proceeded to clean the mess up. After about an hour the two of us had cleaned up as much as possible (you just cannot get every shard of glass). I proceeded down hill and put a temporary lock on the gate as I left.

On Friday the 8th I returned again to meet with the forest service and get the proper locks on the gate(there are three locks; Bonneville Power, US Forest Service, and the private land owners). Once done I continued up hill only to find almost as much of the exact same garbage as picked up on Wednesday. Once again I cleaned the area up. Before I left this day though (Friday) I drained both tubs so as to at least inconvenience the late night trouble makers.

Monday the 11th (today) I returned again, surprise surprise the locks were gone again. After some scouting around I discovered they actually blew them off this time with a small bomb. Do not care to go into details on that, do not want to give anyone ideas. Also there was remains of a smashed out tinted car window at the parking area before the gate. It appears somebodies car was broken into. Continuing up the hill to the soak I found more of the same garbage again and a large black sooty spot in the ice compacted on the deck. It appeared these jackasses tried to start a fire just off the deck and it moved somehow onto the deck (right in the middle). So I picked up all the garbage once again and decided the sooty spot needed to go. I put together a few hoses and proceeded to melt the sooty snow off the decks. As the snow was melting under the hot water I noticed an iridescence emanating off the wood of the deck and I noticed a slight petroleum smell. 45 mins later the sooty snow was gone. I then decided to clean up deep under the decks and found a hidden two quart jug of diesel motor oil! These jackasses were starting wet wood on fire with motor oil. Wow! Anyway I managed to clean up everything the best I could.

Scenic Hot Springs is under a constant barrage of vandalism. We are looking at the idea of starting a coalition of a very few reliable trust worthy soakers who are interested in patrolling the springs so as to keep these vandals out. If this is something you have the time for most importantly, please drop us an email. Include your phone number please so we may contact you to discuss details.

Anyway this is one of my most absolute favorite places in the world and it breaks my heart to see such disrespect for such a natural wonder. I have gotten to meet quite a few soakers at scenic and I know that this spring has some special followers that can fit the bill. Please contact us if you are interested.
Posted by Matt at 7:26 PM 12 comments

Matt will be giving a more thorough update but until we straighten out the vandalism over the New Year weekend we will not be giving permission for anyone to visit the hot springs.  I realize that most of those wishing to visit are good people . . . unfortunately, a few miscreants have ruined it for everyone.  Both myself and Matt . . . Bob and a few other volunteers will be paying surprise visits on the springs over the next few weeks and we will be kicking everyone out, regardless of your protests or asking after-the-fact.  I am sick of the vandalism, Matt is sick of it . . . the owner is sick of it.  We ask and ask and the trespassers still head on up and destroy the place.

There is broken glass all over the place up at the hot springs.  Several large (45gal) contractor's garbage bags were not enough to cart the mess out.  There is damage to the linings of both pools, and there is evidence of more fires being made up at the springs.  What part of 'You're irresponsible idiots' don't you folks get?

I will be giving out no more permission slips in the near future.  And I guarantee that those I find up at the springs or on their way up will get turned around . . . or the deputy in Skykomish can come on by and earn his paycheck.

In the near future the gate the trail entrance and one or two other locations will be put under video surveillance.  It is expensive but now necessary.  You are under notice.  Video will be used in prosecution if so needed.


(2) Criminal trespass in the second degree is a misdemeanor.

This property has been posted and the present signs cannot be missed by anyone attempting to visit the springs.  Willful violation, disregard and trespass is Criminal Trespass punishable by a $1,000 fine and/or 90 days in jail.  Willful disregard of notice to leave or re-entering after being warned off is Criminal Trespass of the first degree with commensurately steeper penalties.

And those that damaged the Forest Service gate and the locks . . . be assured the Federal government takes a dim view of this type of vandalism and of vehicular trespass that if you are caught (we took pictures of the tire tracks), you will face Federal charges.

Everyone say 'thank you' to these miscreants.  Scenic is closed!
Posted by Rick at 8:22 PM 3 comments