Peek-a-boo, I see you

Okay, so let's not totally embarrass the antics of some of the dozens of trespassers to the springs over the last week. I will share just one image of a curious dude intent on examining it where I thought the camera was well-hidden. I'll place it better the next time. And maybe the next time I will post those embarrassing photos as a trespasser has little reason to expect privacy while traipsing on private property. 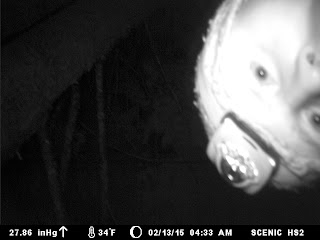 The conditions at Scenic are far from ideal. The recent spate of warm days followed by snap-freezes at night has created serious ice conditions on the trail. Even crampons are not enough on the steeper sections. You head up there and you risk serious injury. Please stay away. 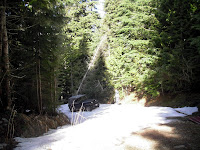 The lock was missing again. It will be replaced tonight. I caught one couple driving a jeep into the clearcut. When asked what they were doing there . . . they got caught in the snow at the bottom of the BPA loop . . . they became beligerent and outright threatening claiming they had a right to go anywhere on a Forest Service road. I pointed out the gate was shut and in place for a reason. Plus, where they were is no longer a FS road but a BPA maintenance road and private property. I almost called the sheriff and then retorted, "Fine. I'm going to lock the gate now. I'll come back in a day or two to see if you need help getting out." The bluff worked. They eventually dug themselves out and headed back out. I did them a favor because I could have just as easily replaced the locks without the knowledge that they'd snuck in.
Posted by Rick at 3:46 PM