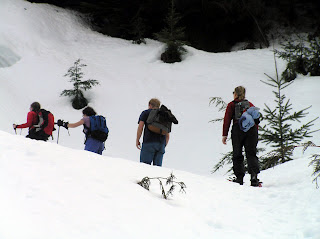 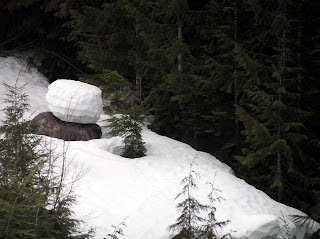 I must apologize to my lack of posts regarding Scenic. It's not that Scenic has been forgotten, but more of that there is little of a public nature that can be posted and a certain desire on the part of Mother Nature to make it difficult at best to visit Scenic. Weather in the Cascades has been pretty brutal these last several months. In a nutshell . . . there is still lots of snow up at Scenic!

I want to also acknowledge all those who have contacted me about Scenic . . . and in most cases, volunteered to help out in some form. No, I haven't forgotten you . . . there is little, if anything, we can do while there is snow on the ground. But spring is coming and I have your contact information recorded and ready for the next clean-up party.


Saturday, Ryan and myself . . . along with several grad students from the UW . . . met for an impromptu snowshoe trek up. Little did we realize just how heavy the fabled Cascade Concrete can be, and how just a few hours of mild February sunlight can weaken the top crust of snow and make snowshoeing a reasonable facsimile of 'postholing' . . . at least for us heavier guys. The girls had no problem staying on top. Ryan, unfortunately, misjudged the nature of the snow crust and attempted to do it sans snowshoes and with a 50 pound pack! He postholed all the way up and really got a workout. I understand he was pretty sore at the NAC Swim later that night. 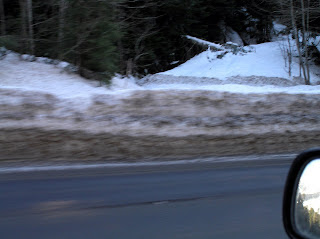 Eight foot high snow and ice berm across FS850
The berm produced by the snowplows this season seems a record high . . . seven to eight feet, and it continues all the way down the highway on both sides. Either you climb down and chance walking next to traffic, or you trust your sense of balance and hike the top of the berm all the way from the BN staging area down the highway (again, close to traffic a few feet away.) 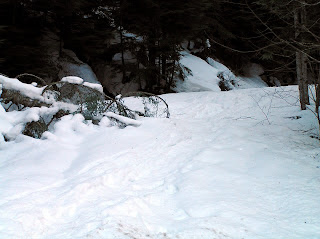 Once over the berm and on FS850 and eight feet of snow that's getting friable and giving way we can relax and head on up. Note that a good-sized tree has been blown down across the access road. A project for clean-up once the snow is gone. Any volunteers with a chainsaw? Let me know first.

On the way up FS850, snowshoe tracks lay evidence to a number of visitors recently. Most take the longer and easier route of the road and we try to stay in their tracks on the unstable snow. Some take their chances on the bypass like we did. It does cut off a lot of distance but is steep, narrow and very icy. 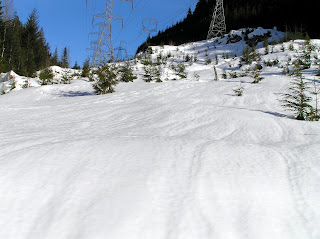 The BPA clearcut
The beauty of virgin, undisturbed snow over the BPA clearcut looks like a snowshoer's idea of heaven. Five days earlier and I would have agreed . . . having made my own trails easily to the upper BPA road. As pretty as this stuff is, it's better to stick to the more-or-less packed down tracks of previous visitors.

To the right are tracks coming down from the first BPA tower. Those tracks would mean little to most people unless they knew there is an old trail coming up from the Surprise Creek Trailhead area. This is the back way into the area and known to few people . . . mainly because it is exceedly steep and especially difficult during winter. It's also easy to get lost with the loss of trail blazes over time. This trail was commonly used during those initial years after the enforced closure of the hot springs by the sheriff's department. Diehard Friends of Scenic would use this back route to evade detection. 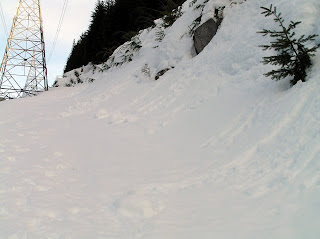 Once onto the upper BPA Road the going doesn't necessarily get any better. The snow is as deep and subject to a lot of drifting from the constant wind that blows from west to east through the clearcut. Under all this snow (and cutting across the BPA road) there are a number of running streamlets from the hot springs sources higher up. They cut snow tunnels beneath the snowpack, giving us the snow bridges that can make life very wet, cold and uncomfortable for those who are unlucky to collapse one and end up the the icy-cold water beneath. I think everyone I know of has experienced falling through one of these. It's not much more than a trickle below but it is enough to ruin your day. Fortunately, we had no incidents on our way up. All of the creek crossings were identifiable by the diagonal dimple in the snow cover; or had already collapsed and partially melted to give themselves away. 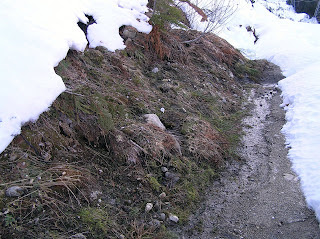 I keep my eyes open for the signs of higher-than-average geothermal gradients. Winter and snow cover make this easier because patches of snow-barren ground stick out like a sore thumb. There are a number of them that I keep my eyes on during the hike up. 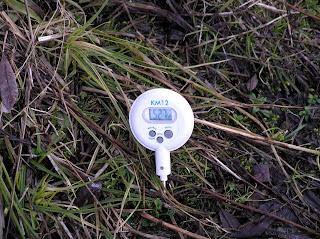 52.7 F is quite high in the overburden, considering that ground temperature measurements fifty feet to either side of this snow barren area are in the middle to high 30s. This particular measurement was taken in a young spring source uncovered during the BPA road realignment of 2003. 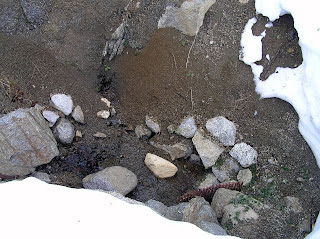 The 70 degree F spring water coming out of several fissures in the decomposing rock and breccia is substantial and warranted a culvert when the BPA crews accidently opened up this spring. This area continues to erode and continually block the grate in front of the culvert. In the image above, the grate is almost occluded and requires clearing before major snowmelt starts. Otherwise it will overflow the BPA road and do major damage. This will be one of the cleanup projects in the coming weeks . . . to clear that (and other culverts) for the spring melt. 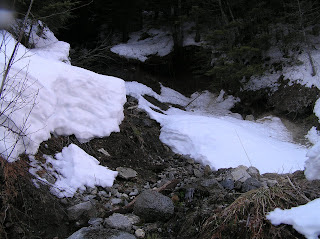 Collapsed area of Honeymoon Creek above the BPA Road

Another area that continues to show a large geothermal reservoir is the area where Honeymoon Creek crosses the BPA road near the trailhead. Two years ago this area did a major landslide and buried the then-existing culvert under tons of mud and rock. The creek continues to erode a channel across the BPA road, which we remediate temporarily with fill. Eventually the culvert will have to be replaced in a better location. 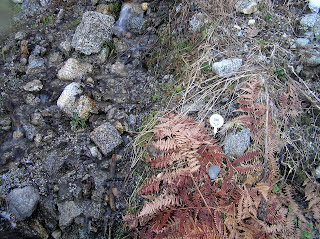 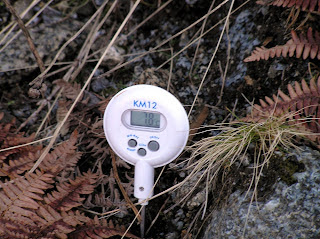 Ground temperature measurement where
Honeymoon Creek crosses the BPA road
Several hundred feet higher, the Honeymoon Springs fill a small pool with 85-90 F water. The thermometer stuck a few inches into the ground near the BPA road shows 78 F. There is a lot of hot water flowing through the ground here and evidence of it can be seen in the massive snowmelt on the slopes below. 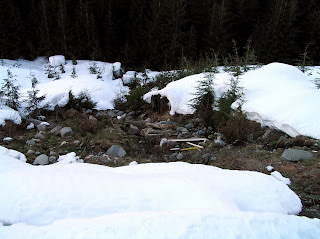 Snow melt on Honeymoon Creek below the BPA Road
There are several obvious warm-hot springs sources evident on the slopes below the road. Unfortunately they are unsuitable for use. 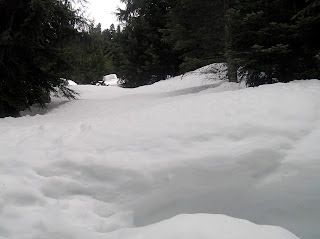 View looking up from the trailhead
Turning onto the trailhead gives you an even more impressive idea of the amount of snow we are going to be up against. Fortunately it's not as bad as it looks due to the camera angle. Tell that to Ryan as he postholed is way onto the trail. 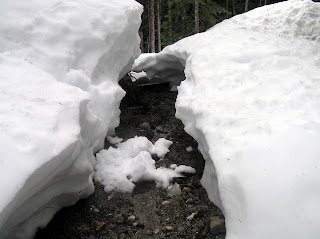 Two hundred feet up we come to Honeymoon Creek again . . . this time as it cuts across the trail after cascading down the steeply eroded slope from the source. The snow here is four to five feet deep and you can see the scramble up the other side from someone who didn't quite manage to step across the narrow fissure. 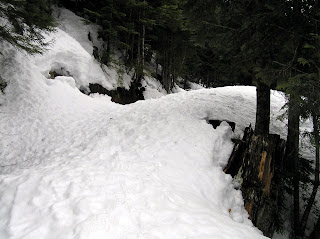 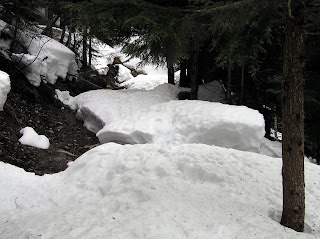 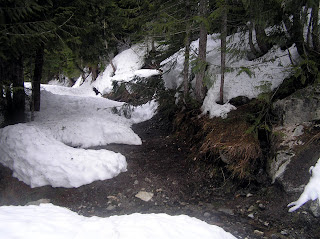 In the Meadow Springs area the snow cover is thinner and the area shows substantial melt. It makes a good respite from the arduous trek up so far. 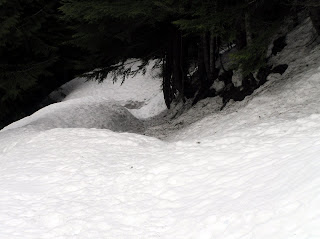 Looking back down Rock Alley from above
Five days earlier Rock Alley was essentially impassable with over ten feet of snow filling the vee. Three to four feet remain but the snow is very soft and givable. We opted to come around from the old logging road side and thence up onto the middle crest. The rest of the climb up was essentially more of this stuff. 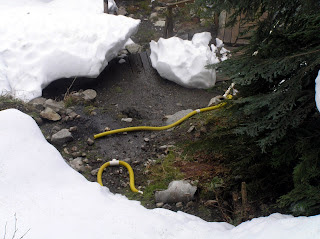 Upon arriving above the hot springs we got out of the snowshoes for the final climb down. The snow is very unstable here and I spent some time breaking loose large slabs of snow to make a safe way down.
As can be seen in the image, the piping from Bear Den Springs was disconnected, and I suspect that is a result of a moving slab of snow from earlier. We reconnected the pipes and got ready to enjoy a soak. The pool was in pretty good shape; water clear but the liner slick with a coating of algae. Scrubbing and some siphoning brought the pool back to tiptop shape. Lobster was running it's 120 F hot with Bear Den around 110 F. Conditions, trash-wise, were actually pretty good around the springs. I'm sure that was because of the difficulty of access these last several months.

The trek down was much more difficult than the ascent. Snowshoes were an essential yet snowshoes are not very good on steep slopes. You have to remember to dig and plant the cleats in before transferring weight. Nonetheless, I found myself on my butt sliding down the slope more than a dozen times. 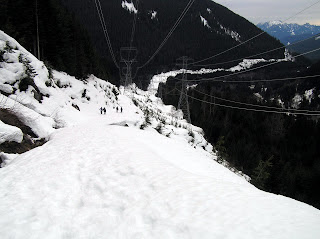 Homeward bound after a great day on the mountain
Posted by Rick at 2:07 AM 5 comments