In a nutshell, the snow is melting but there is still plenty of it. FS850 is undriveble with unstable snowpack from three to six feet. Erosion on the slopes is typical for the spring melt, with a few new wrinkles but no major sliding. Snowshoes are still advised but they will go on and off, as there are plenty of bare patches. The air temperature at the pool was a cool 39F when I arrived at 4pm.

The springs sources have done a switch with the Lobster sources between 57F and 43F and triple the normal volume. The Bear Den sources are a lower-than-normal 101F with nominal flow . . . enough to keep the pool a less-than-comfortable 90F. As I write this, the freezing levels have dropped to 3,000-3,500 ft, and it is snowing lightly on the north slopes of Scenic again. Rick

At the request of Mike, I hiked up to Scenic Hot Springs to check on the snow conditions. The snow berm is still in place across the entrance to FS850. The berm up the highway from the BN staging area is very unstable and dangerous to walk on. Rather than take my chances walking close to traffic on the narrow shoulder of the highway, I decided to check out the hikers' back route . . . a route I haven't hiked in years. This route avoids the highway entirely but makes for some treacherous footing and steep slopes. Heavy snow evens out the ankle-biters from snags on the steep slope but with the accelerating snow melt there are a lot of places to fall through if you don't have secure footing before putting weight on your snowshoes. 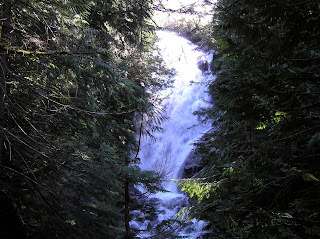 Starting at the BN Staging Area, the back trail to the
springs begins at the spectacular Scenic Creek Falls

From the parking area you take a spur trail into the canopy toward the lower waterfalls of Scenic Creek. On the knoll, overlooking the waterfalls as they plummet 100ft from the precipice of the clearcut above, is an indistinct trail upslope to the east (looking left as you view the waterfalls). This is the backdoor route used by Scenic HS visitors many years ago. 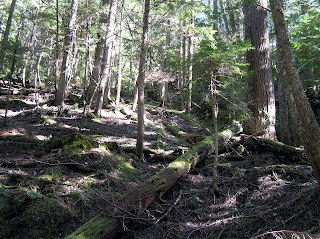 Slopes approach 50-60%, so sturdy and sure footing is necessary. However, you gain elevation very fast and quickly negate the 400ft difference between the BN staging area and the first tower where the forest service road enters the clearcut from the more traditional approach. 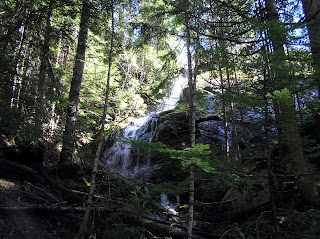 Another waterfall, this one nominally a trickle. Just beyond
Murphy Creek you enter the BPA Clearcut west of the FS 850 tower 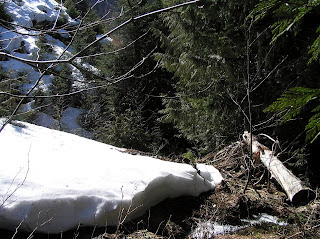 On go the snowshoes. This view looks back at
the ravine created by Murphy Creek. 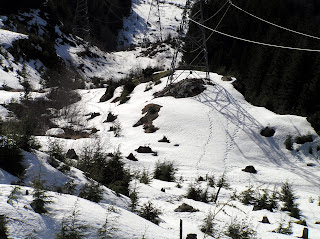 Looking back from the top of the second bypass trail. You can see my
tracks from the back trail around the left of the BPA tower. 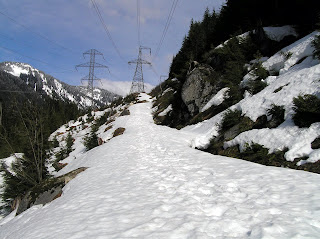 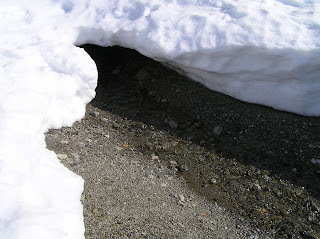 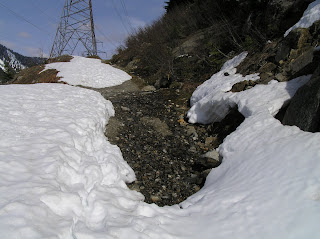 The Meadow Creek runoff has split into two streams,
one of which is running down the road

Meadow Creek is running strong at the BPA Road. Coming down the slopes from above, it has cut several separate channels with one of the streams running down and eroding the road surface. 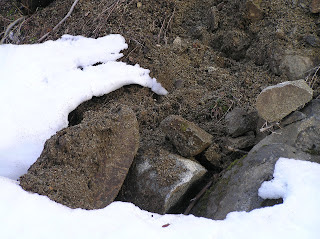 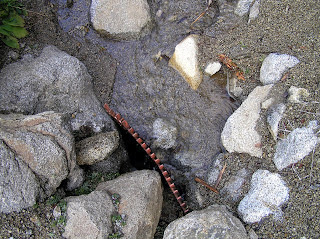 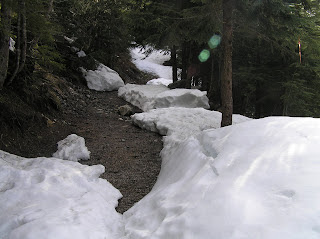 Meadow Creek where it crosses the trail 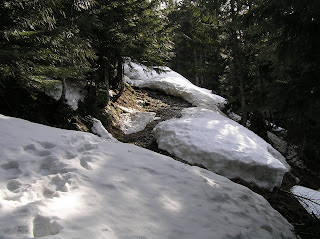 Melt and erosion where the Main Creek crosses the trail

The amount of melt around the Main Creek crossing surprised me. At the upper end of the melt zone in the above picture, we installed a waterbar last year to divert flow. However, flow from a couple of spring sources further up are coming down Rock Alley, jumping the waterbar and eroding the trail down to where the water rejoins the Main Creek. All the snow in this picture and the preceding ones, is unstable and perched next to the downslope sides of the trail. Crevassing is indicative of the threat of this snow breaking loose and tumbling down the slopes very soon. Footing is very tenuous because you don't know what will give. 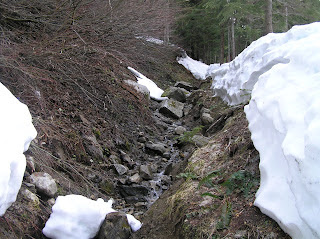 'Rock Alley' has melted of its 8ft snow plug.
A 4ft snow wall greets you at the head of the alley

Two weeks ago, Rock Alley was filled with an eight to ten foot plug of snow. That is all gone now. Just before the headwall of snow at the upper end, a couple of springs are flowing strong and that is the source of the flow seen coming down Rock Alley.

Once above the headwall, the snow stays firm and deep . . . icy, for the most part. I needed the cleats of my snowshoes to feel comfortable hiking the rest of the way up to the springs. 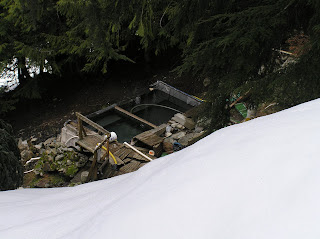 The Monster Tub as you come upon it from above

The snow above the springs remains deep and heavy . . . perched dangerously above. Around the sources and the pool area, the ground heat has melted most of the snow. 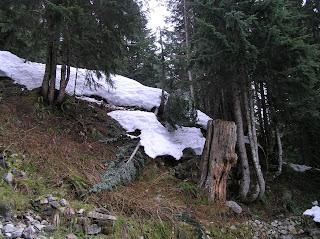 From the tub deck, slumping snow has taken down a few smaller trees above 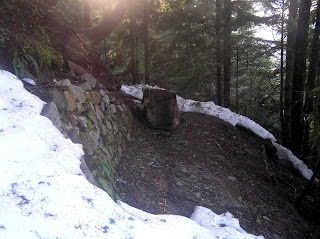 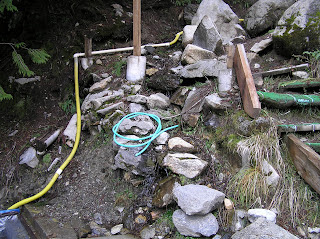 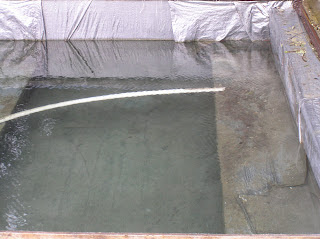 Water is reasonably clean due to the huge rate of flow.
There is a lot of breccia and dirt in the pool from minor slope erosion 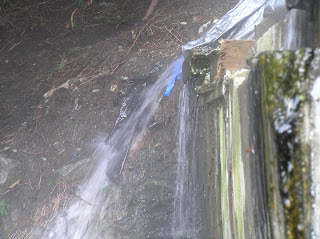 The feed from the Lobster sources is large and cold.
I've redirected it around the pool