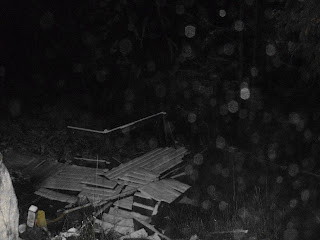 Half an inch and still falling at 2am
Just a seasonal early dump as Tuesday's storm front piled up west of Stevens and was forced on high by the narrow pass. The snow evolved from some pretty heavy rainfall around 8pm as temps dropped below 40F, finally hovering around 37F when I left . . . still dusting snow lightly.

The snow level was around 2,600ft . . . just at the beginning of the clearcut (none at the gate which is 2,400ft). The springs are at 3,500ft, which is the same as the pass (plows were operating up there last night). Unlikely it will last past the morning warming.

Boring night, mainly. Got a lot of reading done and only had to turn around one party of three young men heading up. They didn't seem too happy with the sudden turning on of the headlights right in their path but it's kind of hard to argue they had permission under the conditions they were caught. Sorry guys . . . there is no nighttime soaking at Scenic Hot Springs and we are going to enforce that ban . . . with calls to the cooperative local deputy if need be. The fine for trespass is $1,000 if you want to be stubborn (felony trespass, if you've been caught again, carries a fine of $10,000). Stay away from Scenic at night time . . . ask permission first in all other cases.

A new twist are trespassers hiding out in the woods nearby the pools . . . or under shelter of the old latrine, as last night. Before I left I hiked on up to the springs . . . and I tend to hike with a very narrow headlamp. So coming back down off the bench I noticed a flicker of light passing above that latrine. Sure enough . . . someone was hunkered down with a little candle just waiting for me to leave. Where they parked, beats me. I suspect he was camping nearby but after telling him to leave private property I was not about to follow him back on the path he took . . . not into deep night and fresh snow. But I will make it a point to check the springs earlier during daylight for campers. BTW, camping and campfires are expressly forbidden on the property!

Again, a reminder. There is no night time soaking allowed at Scenic Hot Springs . . . for many reasons. We will be enforcing the ban and I suggest you don't argue with those who are empowered by the owner to act. As Tuesday's sudden snow dusting shows, conditions at the springs can change in a heartbeat.
Posted by Rick at 4:16 PM

Email ThisBlogThis!Share to TwitterShare to FacebookShare to Pinterest
Labels: Conditions